To binge or not to binge. Part 1 – binging in Asia

February 28, 2017
The Oscars are done and dusted for another year! More than ever, subscription video on-demand (SVoD) services like Netflix and Amazon Prime Video are gaining the spotlight with feature film nominations. This edition of Asia Express looks into the at home entertainment situation in the Philippines, Singapore and India. At Rakuten AIP, we were curious to see how video on-demand (SVoD) services are gaining traction in Asia, namely the Philippines, Singapore and India, in comparison to the US. In a two part series, we first examine how common SVoD services are in Asia, and will later look at some potential barriers. First, let’s take a high level view of how common SVoD services are in these countries. When viewing TV shows and movies, PCs and mobile devices used more in Asia While TV is still the dominant screen for viewing TV shows and movies in all four countries, nearly half of those surveyed in Asia rely on their PCs and mobile devices (smartphone, tablet) to deliver this form of entertainment – much higher than the US (30% PC, 22% mobile).

Table 1 – Q. Thinking about the past 3 months, how do you usually watch TV shows and/or movies? (Select all that apply) 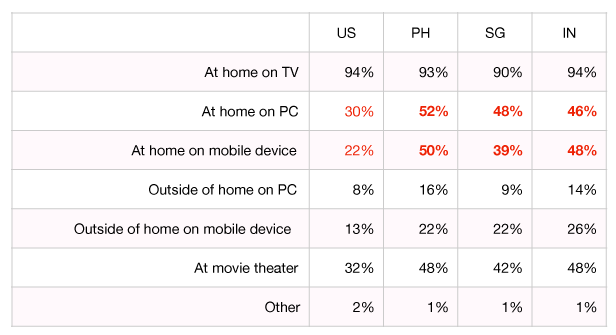 SVOD more prevalent in US and India, while less so in the Philippines and SIngapore While video streaming services have been around in the US a lot longer (Netflix 2007, Amazon 2006) than its Asian counterparts (iflix in Philippines 2015, StarHub Go in Singapore 2015, hotstar in India 2015), usage in Asia is picking up quickly. India boasts over half, while in the Philippines and Singapore roughly a third of surveyed respondents are subscribed to video streaming services.

Table 2 – Q. Are you currently subscribed to any video streaming service? (Select one)

Netflix gains prominent space in SVoD, especially in southeast Asia (Philippines and Singapore) With the global expansion of Netflix in 2016 (130 new countries), Netflix has gone head-on with local competition in Asia. Among surveyed respondents, Netflix has overtaken iflix (39%) and HOOQ (32%) in the Philippines as the leading SVoD service (60%), and is in a tight race in Singapore with StarHub Go (52% vs Netflix 49%), while Amazon Prime Video there is in a distant third (12%).

Interestingly in India, hotstar is a local favorite (fueled by cricket matches and Bollywood, now with other entertainment) with a dominant 71%, with Amazon taking the second place at 47% and Netflix trailing in third (35%).

Table 3 – Q. Which of the following video streaming services are you subscribed to? (Select all that apply) 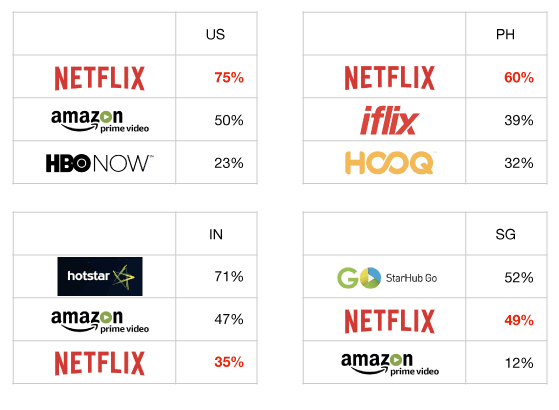 “Easy to use. Has great original programming. Easy to binge watch.” (US)

“Netflix has good original series shows. Connecting to netflix is easy and the streaming does not take too much time. Quality of the video adjusts according to internet speed.” (Philippines)

“Can stream all the shows or download it for offline use. Has their own original series, and other popular series.” (Singapore)

“It contains a wide variety of shows and movies I am interested in watching. Also there is a download option to watch later.” (India)

Even though Asia is a much younger market for subscription video on-demand services, we’ve seen that it’s picked up very quickly, especially in a market where PCs and mobile devices are heavily used to consume entertainment media. The growth and expansion of Netflix has had a significant impact on local competition. In the second part of this series, we’ll look at some potential barriers to adoption – what’s keeping those non-adopters from subscribing? Until then, binge watch your favorite shows, or if you want to take a break from your mobile devices, why not head out to the big screens and enjoy two hours of uninterrupted entertainment delight.

Share this
Romance or Obligation this Valentine’s Day? To binge or not to binge. Part 2 – barriers of SVoD adoption