Amazon is a household name in most parts of the world and Asia has its own Amazons in the ecommerce and online shopping world – Alibaba in China, Rakuten Ichiba in Japan and Qoo10 in Singapore to name a few. Getting the Asian shopper to switch from brick and mortar to a virtual experience has been an ongoing challenge for many online retailers.

Internet users in China indicated strongly that their main purchase channel for casual clothing is online, closely followed by the shopping mall. This result is in contrast with the other regions (Singapore, Hong Kong and Vietnam) where a purchase from a traditional retailer remains common. [Table 1]

Table 1 – Where do you buy the products listed below? (MA) – Clothing (Casual) 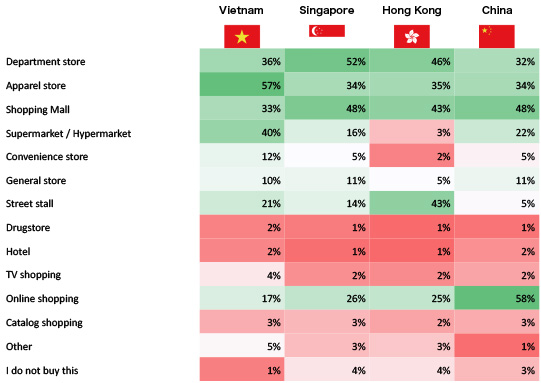 It seems however that the tipping point in China has arrived with 43% of respondents indicating that they purchase the most intimate of items, in this case underwear, online [Table 2]. In Singapore the ever prevalent Department store remains the dominate purchase channel, with Vietnamese shoppers preferring a specialist apparel store to buy their intimates.

Table 2 – Where do you buy the products listed below? (MA) – Underwear 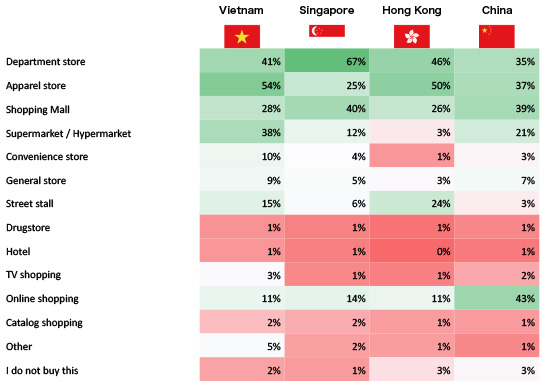 The locations where people buy their bags shows an interesting variation. Online is also dominant in China, and this should explain to many the reason why Alibaba was the largest ever IPO. In Hong Kong, despite the obvious Chinese influence, Street Stalls remain a popular option for bag shopping with open markets remaining popular in the city.[Table 3]

Table 3 – Where do you buy the products listed below? (MA) – Bags

Together with changing purchasing channels, we were interested in seeing how users were influenced prior to purchase. China and Hong Kong both show heavy influence from Social Media and blogging sites. Traditional media such as Television and Magazines continue to hold sway in most countries, however in China Magazines are no longer the go to resource for Fashion tips. [Table 4]

Table 4 – What are your preferred information sources regarding fashion? (MA) 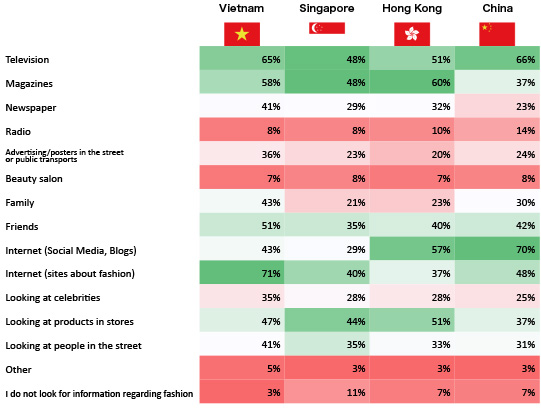 Share this
Study abroad ~ Asian Trends on Planning, Where to Choose? Global HR Issue: Employee Motivation in the Asian workplace